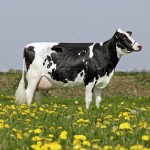 1-Holstein friessian
The breed originated from the Netherlands, it traces back to the Dutch landrace breed. Export began from the ancestors of the present-day version to North America in 1852. The dairy farmers on both continents have formed alliances, from 1880 on, so breeders could defend their interests. The past 150 years of breeding resulted in today’s dairy Holstein-Friesian, the most common world type. This is the most common breed in modern large-scale milk production and ideal for unbound, group housing. It has the largest populations in Europe and North America. Cutting-edge genetic, biotechnology and computer equipment serve the already cooperating practitioners, researchers and farmers for development. Today, a broad international collaboration is taking place in the milk production of biological and technological modernisation. The Holstein-Friesian breeds’ selection are serving the needs of husbandry and feeding industry of very high
international level. 2-Aberdeen Angus
It is of Scottish origin, and a widespread beef cattle race in the world, which is now being bred in several types. The name refers to those two shires, where the main lines were bred. Initially it was a small, early maturing race. As a result of planned selection and pairing during the decades, it became a very modern and popular breed. It is common throughout the British Isles, entire Europe, North and South America, New Zealand and Australia.
It is polled by genetic inheritance and it is easy to handle in a larger group. This breed is non-aggressive towards humans. It has a solid black or dark red color, which latter is of recessive heredity manner. Approximately three-quarters of the population are black. In regards of production, there is no significant difference between the black and red color variations. 3-Charolais
It is the most widespread beef cattle race in the world. It evolved in Central France around the towns of Nevers and Charolais as a triple use race. A selective breeding in the direction of beef cattle turned it into one of the most renown and most excellent race in the world. It can be fattened to a high final weight.
Its fur is typically yellowish buff helping its recognition even from a distance. Its head is relatively short and its front is wide. During the selection process bloodlines without horns were also developed. Its neck is short, strong, well musculated.
The trunk is deep and cylindrical with an enormous musculature. Its European version has shorter legs and more muscular while the American version is longer legged and slimmer.
The body weight of the cows is 700-800 Kg while that of the breeding bulls is 1200-1300 Kg. As a middle-late maturing race the heifers can be taken into the breeding programme at the age of 20-24 month of age. 4-Limousin
The race has been bred in an independent register-book system since 1850. It evolved in Central France around the town of Limoges. It was bred as a dual use race until 1900 then it was selectively bred in the direction of beef cattle.
Nowadays it is already a well-known race worldwide with a big body, good resistance and long lifespan. It is not uncommon for the cows to deliver 10-12 calves during their life cycle.Its color is brownish red. It has a paler tinge around the eyes and the muzzle.
Its head is short, its front is wide and its horns are pointing upwards. A version with no horns exists, too. The trunk is deep and wide and richly musculated on every body part. Its skeleton is explicitly delicate.
The full-grown cows weigh 600-700 Kg while the bulls weigh 1000-1200 Kg. A middle-early maturing race and the heifers can be inseminated at 18-20 months of their age. It gives birth easily and the maternal instinct of the cows is strong.
​The corrected calf weight to 205 days is in the range of 210 Kg. The daily weight gaining of the beef bulls is 1100-1200 grams. Its outstanding value is the excellent slaughter quality. The slaughter yield is 63-70%. A race for the paternal line for final product crosses. 5-Simmental breed
Simmental race group (Hungarian pied and other highland pied races)
It is kept as a double purpose race in Europe while it is used as specialised beef cattle in America. Selective breeding is carried out during high level breeding programmes and in integration in Germany, Austria, France, Switzerland, Romania and Hungary.
The color of the race ranges from pale yellow pied to deep cherry red pied. The coloration of the head is characteristic with the white dominating. It is a middle-sized race showing high deviation values. The weight of the cows is 600-800 Kg while that of the bulls is 900-1300 Kg.
Heifers can be inseminated at the age of 17-18 months. Difficult births are not typical. The growth potential, meet producing capacity and meet shape are equally excellent. Its meet is marbled, tasty and of good quality. It serves both as parental and maternal line in crossing programmes. Its milk production is medium but the milk content values are high.